When I was 13 years old there was an old guy lived near us, and he was the photographer for the local newspaper and I used to see him walking about with his camera in an old RAF shoulder bag. One day I stopped him and asked him loads of questions about his life, and this old chap was real cool, and it inspired me. So I saved up me money from my 2 paper rounds and I got my first camera. I can't remember the make but it had a lens that you could push back in, and when you pressed the button on the top the lens shot out. Groovy. I used to take pictures of anything, birds, cats, dogs, and me mates, and I used to wait for the prints to come back from the chemist all excited, hoping they all came out. At first I was as awkward using it as a left hand trying to scratch its own elbow, but I persevered and gradually I got the hang of it. Then I got a twin lens reflex camera a Yashica, a real beast of a thing in a leather box and I did a few weddings and portrait shoots for friends.

Next I got a bit serious and joined a very artistic photography club where we used to have all sorts of themes. We had to get shots of different subjects for club show nights when we brought our slides and showed them on a big screen, and we all gave an opinion on our shots. We did themes such as cemeteries, night shots, crowds, sporting contests and we had models along, sometimes some of them nude. Very arty. Still not using digital format as I don't think it was out yet, I had a brace of Pentax cameras. 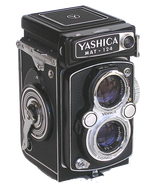 A few years on I was Chairman of the Range Rover Register Ltd and the editor at Land Rover Owner used to keep in touch, and one day he called and said he was a bit stuck for a decent article. I told him about a new member near to me who had been working out in the Gulf oilfields and he had bought himself a new Range Rover out there. He loved it so much that when his contract was over, he put his wife and kids on a plane, and he drove it home alone over the Atlas Mountains etc, and it still had sand under the floor mats. A few months later this article appeared and my girlfriend/partner at the time young Hazel said, " you twit you could have done that with your lovely Canon camera, why give it to them he only lives a mile away from us". Well that planted an idea in me head, as when I was at school I was a bit of a dud, but I excelled at what was called back then Composition (story writing) in English classes. Because I lived in a sort of dyslexic parallel dream world, mathematics and such like was lost on me, but if it had of been an Olympic sport I could have wrote stories for England although my writing was unintelligible just like a doctors. My first article appeared when I was at the ARC Nationals near Belper up North and I noticed that there was nobody there from LRO. So I took lots of pictures even interviewed one of the original  Land Rover Experience drivers, dashed off some text and mailed it into LRO. What a buzz when it appeared so I did a few more freelance articles for them.

I was at an off road day at London Off Road at Thamesmead (where Belmarsh Cat A prison is now) and a chap came up to me and asked if me if he started another Land Rover magazine would I buy it, and he asked for my name and address. He had a sort of stand with a few forms and bits on it and it started to rain hard, so I ran over to him and helped him cover it up and we put it all in my Range Rover and took it to his car. That was Richard Howell Thomas, and later when he started Land Rover Monthly with his partners I went over to him and stayed contributing there and for years had a monthly column - Open Roads. When I first went with LRM I was still using my mighty Canon A1 film camera, but although I wasn't too bad at getting decent shots it was a bit hit and miss waiting for the prints then mailing them off. So I was persuaded to go Digital and spent a small fortune on high end Canons and their USM lens range and a laptop computer to check your results on site. Upstairs there are 3 filing cabinets full of prints and negatives, and one day I will sort them all out, and in the cupboard under my knees as I write this, there are external hard drives, memory sticks, and discs full of my digital work. Over the last 30 odd years contributing to magazines, newspapers and doing  some film work it's been a blast and I've loved it having a voice in magazines and being able to reach out to people. As I wrote I used to imagine that I was writing for one reader my special friend Everard, who lived on his dads smallholding in Little Futtock on the Wold. Everard never had much dough and he only ever had old Land Rovers, and he had all the problems I had keeping the bloody things going. When I started writing for him he was a young kid, now like me he's a bit older and we have grown up together. So I write for his son Ned now whose trying to keep Dads old sludge pumps on the road. I know it's all a bit silly, but believe me when your late and trying to hit a deadline, and they are all in bed, and your banging away with your ear phones on at the PC at one o'clock in the morning, straining like forced laughter trying to cobble together a thousand words it helps. Anyway that's enough about me so enjoy the site and take a look at the blog on the site CHARLIE BLOGGS named after a great friend of mine who went to work as a boy on a traction engine team, and he used to tell me many stories of the old days working all hours harvesting and ploughing on the farms in Kent.