Well how are you it’s been a while owing to some surgery I had in late May. Upshot of it is I have lost 28lbs in weight, and it’s made me feel weak and tired some days. So, I’m eating like a jockey that’s just retired, but it’s a hard slog to get back to where I was before. Some days I could eat a fat lady between 2 mattresses, but mostly me appetite isn’t good. If you rocked up at the Billing Land Rover show in June, I hope you had a great time. It was a bit risky for me to go so I handed over the running of the off road side of the event to the Chief Marshal Barrie Holt and Assistant Course Director Matt Drew. My spies tell me they did a decent job over the weekend. Be careful you two I got me eye on you both you little tinkers. There seemed to be a bit of a lull in attendees at the Land Rover and 4x4 shows a while back, but I think they are all doing better just now with tyres on the grass (not bums on seats) the last 2 or 3 years. It is certainly the biggest part in my year, and we have started planning for 2020 already. Also hasn’t the filming and the photography we see at and after the shows, gone up a notch? Some of it is stunning, and the films that are posted using those drones following 4X4s off the road is just awesome. I note that there is now a rom com that attaches to a drone, and the user puts it up in the air positioned above the car and it just follows on automatically locked on. I first saw this done on Salisbury Plain. Brilliant, how good is that?

TOW NO MORE AND A DANGEROUS GAME

I do not really enjoy towing a trailer or a caravan much anymore, so our caravan lives on a lovely farm site down in Kent near the coastal towns. We just manoeuvre it onto the camp field plug it in and have breaks there, and we are quite content. We can go to any of the coast towns like Margate or Whitstable and Canterbury is an easy reach as the park and ride which drops us off right in the centre is a couple of miles away. The sports car Johnnies just don’t seem to give you any consideration anymore thanks to certain dumb ass TV shows, and even some of the truckers who should know better can be just as bad. A few years back there was an advert around about a juice drink called Tango, and there was a voice over done by Butch Wilkins I believe. A guy in an orange suit used to come up behind the drinkers and slap them in the head, and the voice said (you’ve been Tango’d.) Of course, all the kids started doing it if anyone was drinking from any can and it got quite serious with schools banning it and old people being knocked over etc. Few months back some jokers in a car with a handheld camera were driving down a lane, and as they passed an older lady on her sit up and beg bike, the passenger put his arm out the window and pushed this poor lady into a ditch. As the camera swung round back inside the car you could see this guy’s face and they all cracked up laughing. I do not know if he was prosecuted. It was soon on social media, and now all the dopey twats are doing it. A guy I know his son who rides thru country lanes to get to college was slapped round the head as a van passed him and, a few days later another van passenger squirted something into his face as they drove by. If that happened to a cyclist and he went into a wobble he could end up with his leg under the back wheels and be badly injured. I suppose it will all end badly with some poor soul getting badly damaged bike as well or worse killed. What larks these thicko idiots get up to.

Nothing much to say here because when I knew what the surgery entailed and the time period for recovery to be able to drive was, I SORNED the Ford Edge and the Discovery 2 TD5. Before I did so it was time to have the Edge (we call it Bono) to have its first service. How did I know because Ford kept driving me mad messaging and calling me? As it happened, I didn’t get them to do it, and used a local MOT place near me, and saved a few bob. See my last Blogg. Turns out though that I dropped a bit of a clanger when I bought the Edge. It was sold the year before I got it, the car being prepped for the first customer all registered etc. Apparently, the new owner had to back out of the sale owing to serious family issues. So, when I asked the service garage to stamp the book, they pointed out that in fact they should stamp the second page as the car was a year old when I bought it. My mistake was I should have asked to see if the Ford Dealership could have re-registered the car 2018, as I was the first owner. If I wanted to part exchange the Edge now for another car, I would be offered a price for it being 2 years old. I suppose its not too bad though as I got the car for a really cheap price, saving myself nearly £8,000.

HAPPY AT THE VALLEY

At the off- road site, I look after in Kent Happy Valley 4X4, we now have over 300 friends on social media, and we get a good turnout sometimes. We are now offering our friends the chance to get an off- road qualification with us. Those that are interested can get an NVQ Level 2 Qualification in Pre- start Safety and Operation of Off-Road Vehicles and Use of Vehicle Winches. After we have trained the applicants as to what to expect on the day, they take the test, a City & Guilds assessor comes along later to do their assessment. We have had 4 of our friends avail themselves of this so far, and they all passed. They all said that they learnt something new, and that they felt it was worthwhile and they are glad that they now have got this world recognised City & Guilds qualification.

Busy few weeks ahead with our August open day at the site, then I let the annual South East Response team do their training on the site. September another open day followed by a trip with some pals to Wiltshire for a weekend green laning, followed by 6 days at the Billing Off Road Experience site getting it ready and then organising the marshalling at the Land Rover Monthly Magazine Drive Round Days weekend there. Phew! How did I ever get time to go to work? See Ya soon. Charlie.

THE PICTURES THIS TIME

The rope was a tree strop (REALLY?) that a guy brought to the site to practice some winching. The second picture is what I found when I took the tape off. The other picture is a little wire gizmo I am holding you could buy in the 1970s if you had a hi lift jack and you needed to change a tyre on your Classic Range Rover. I would not have got under my Classic with that holding it up myself. It was given to me as a present and I never used it. Its on a nail on me garage wall. 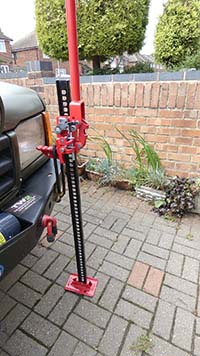 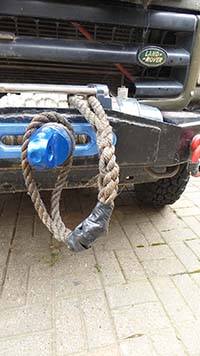 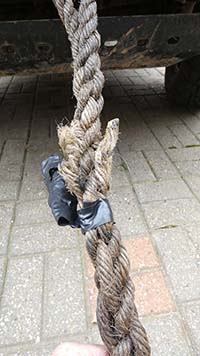