THE PRODIGAL RETURNS TO THE FOLD

It’s been a while so how are you all? Fit and well I hope. Me? well I’m still struggling on, riding me mountain bike whenever I can, although the high winds we been having here in Kent and the South East and the persistent rain has kept me off the tracks sometimes. After a good few years, and I can hardly believe it meself to tell you the truth, another Range Rover has joined the stable, and sits in the front drive next to my old off roader the Discovery 2 TD5. One of these newer models with all the driver aids full of electronic everything, it even parallel parks itself although I will not be trusting that thank you. I rode past it at a country garage whilst out on the bike and it caught my eye. I braked and pulled over and just fell in love with it, and I had to have it. It’s an Evoque Pure Tech SD4 with the full-length glass roof, in a lovely red colour with blacked out alloy wheels, which makes the colour really pop. I must admit after the Range Rover P38 I had for a while, and all the electrickery in them giving loads of grief, and on all the subsequent models that have followed that I have read about that owners have been dogged with, I imagined that I would swerve away from all the newer type of Land Rovers with their miles of wiring and modules, brains, and devices. Let’s face it guys I’m old school a throwback, a right neanderthal when I take me shirt off take a look and check my fur. But having said all of that I do like me Evoque. Underneath our flat screen TV there is a monitor the CCTV of our front yard, and I sit watching the Evoque not the rubbish on TV. Muffin keeps saying to me “stop looking at that bloody car”. I have had to have a new starter and the driver’s door module done already, but its lovely to drive and it is nice to have an auto again to cruise around in. A must for me was to get a tow kit fitted as well, so that I can get the Witter mountain bike carrier on the back and go out a bit further to ride the trails. Only trouble is it sticks out a bit like a dingo’s dick in a desert and spoils the look of the car. I am going to alter it and make it easier for me to get to the bolts so I can remove it until I need it.

Had a bit of a shock mind when I first went to fill it up with diesel. After living with the TD5 and the Ford Edge that preceded the Evoque, I was expecting a refill to be around 70 quid. Within a trice the pump jerked full up the pipe at £28. No way Jose that cant be right somethings amiss here I thought. When I got back home, I reached for the owner’s manual, and to my delight me little Evoque does an estimated 55miles per gallon. That’ll do for me Sid. Whose Sid? Well, he’s the little chap on the TV show about the Owen Family and their nine kids on their farm in Yorkshire. Whenever Sid does a little job his Dad Clive tells him “that’ll do Sid”. As Muffin and I like the show its sort of crept into our dialog.

I must admit when the Evoque first came out I thought it was a bit naff of the company calling it a Range Rover as it’s a bit squat compared to a proper Range Rover, even worse was calling another of the smaller Range Rovers a Velar. Sacrilege that was, there is only one Velar Land Rover and that’s those first pre-production Classic 2 doors. I can only imagine that those owners that are lucky enough to have a proper Velar, must have been choking spitting feathers when that model was first launched.

After a few hours sitting in the Evoque with the owner’s manual on me lap fiddling and setting all the bells and whistles, I joined one of the Facebook owners’ groups. It was a bit frightening with all the posts about the troubles they were all having and the horrendous amounts of money they were spending to keep them going. I was really surprised when there was a post from a guy thinking of changing a late Mercedes for an Evoque. I could not believe the amount of replies posted “keep the Merc don’t do it, your regret it etc”. Scary, but Hey Ho its mine now so fingers crossed its not too much trouble, and if I can avoid the dealerships with their high hourly charges, I may be OK. 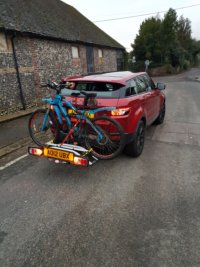 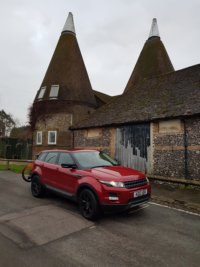 I noticed that the Evoque never had a spare wheel installed. I found out that this was a choice for the first-time buyer when they could opt for one of those skinny get you home emergency spare wheels, or a tub of tyre puncture sealer, a jack and a 12-volt pump to enable the owner to force this sealer gunk into the punctured tyre. Mine had neither, so I trawled the internet and found one of these skinny tyres with the jack, all new never used for £95. Having noticed that there were a few for sale a lot dearer most well over £200, I jumped at this one and bought it on Ebay. Within a few minutes I got a message from the seller asking me when I was coming to Bristol to collect it. IDIOT. In my haste to nail a bargain I didn’t read the advert properly and it was collected only. Not daunted I called my friend Cliff Garrod that lives in Nunney (tee hee hee always makes me laugh when I say or print nunney) in Somerset and as Cliff does a few spares I asked him the best courier to get it sent to me. He told me it was 40 minutes away from him and he would collect it for me. That was a right touch Pilgrims. So, I gave Cliff the address and he said, “hang on my mate lives on the corner of that road, I call him now and get him to pick it up”. Within 20 minutes of buying it the guy had been paid and me wheel and jack was on its way.

To say that there is not much room in the boot of an Evoque, is putting it mildly. Let alone a cat you couldn’t swing a mouse around in it, and laying the spare wheel on the mat sliding around was a deffo no no. On lifting up the loose flat panel underneath there was a void squared off into compartments made of some sort of thick black material that looked like a load of plastic pellets squashed together. I looked at it a few times and thought if I dig all this stuff out the spare wheel will fit nicely within that space. So, I cut a cardboard template of the wheel laid it on and marked around and set too cutting this black stuff out. What a drama it was horrible. As I was sawing it was melting and jamming the saw blade and the pellets were flying everywhere. When I eventually got it all out, I was exhausted. I had to have a sit down a cuppa tea and a fairy cake. There was a bracket on the metal floor exactly right for tying down the spare to stop it rattling about. Sweet! It was predrilled and threaded although it was very thin probably for an M4 thread. So, I drilled it out and tapped a new thread in it M16, and MIG welded a bar across the top of a new bolt to make a key and job done the wheel sits in snug with the jack on top all secure. 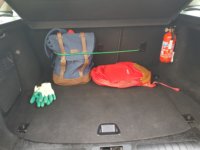 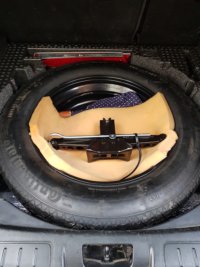 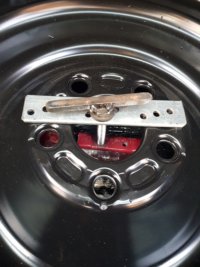 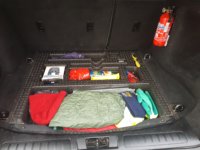 Back as far as 2015 I noticed large companies specialising in corporate alleged fraud, advertising (even on tv adverts) for drivers etc to come forward and register with them so that a case could be put together and brought to the High Court for allegedly misrepresentation of the facts given by the manufacturer when buying a new car. I was extremely interested to see this, as I can imagine that any car manufacturer would like to make the best claims possible about a new model, especially those that refer to miles per gallon. I have recently seen again that it would seem that these legal experts are ready to proceed, as I saw an advert saying that those affected should join now before its too late. These big legal firms must be confident of going to court and mounting a suit, because if they make claims against a car manufacturer, and it’s not found in their favour they would probably be facing huge costs that could possibly bankrupt them. We can only await the outcome.

OFF THE ROAD & KEEP PEDALLING YOU OLD FART.

The off-road site I look after in Kent after we were put in tier 4 of this Covid epidemic has had to be closed for the foreseeable future as it was against the Government guidelines. When I opened it, it took a long time to get going and often we had only 6 of 7 drivers turning up to have a drive around with us. I was thinking of closing up a while back but then all of a sudden word went round and now, we have over 600 members, so we now have to get those wishing to come along to book in on an open day.

Over this past year I have managed 1411 muddy miles on the mountain bike, and for a man of my age (I’m 77 but a bit gorgeous all the same) and with my health issues I am pleased with that. My bike is an Ebike with a battery and a wee motor on the front crank and it gives me some help when I am pedalling especially uphill. Ebikes are not like a motor bike there is no throttle the motor comes into play when you use the thumb switch to select the amount you want the motor to help you along high, standard, eco or eco plus are available and then you can just keep pedalling with less effort. Time now my muddy chums to say cheerio and until we meet, get together or just message each other keep safe, mask up and do your best to keep well and swerve this bloody hateful spiteful Covid virus. 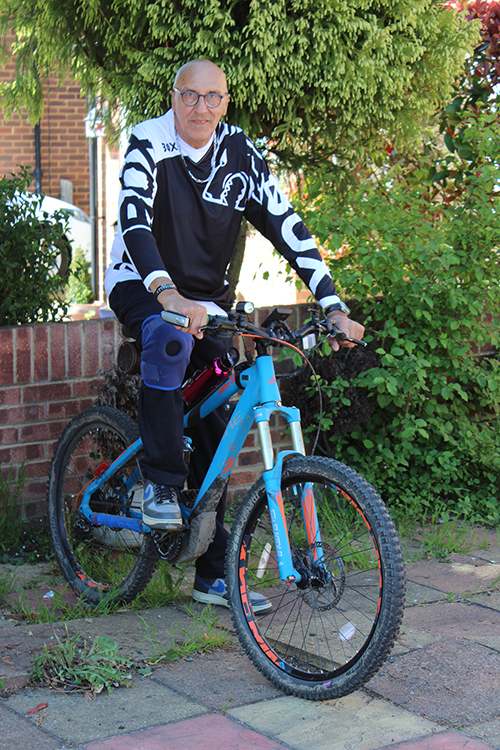