Way back last year Jim Marsden at Gigglepin 4X4 in Weald village near Tonbridge Kent got his super new showroom up and running, and he put on an open day. A good crowd bowled up to give him a good send off and a lot of the faces within the scene were there. I had a good nose round on the day and done a bit of networking and glad handing for LRM as you do, and I was just leaving when a nice little Land Rover Defender 90 County caught my beady eye. It was one of them things when you cruise past a Land Rover and you just think to yourself “just another Land Rover, so what?” but something made me stop and take a good nose around it.  On closer inspection I could see that someone had spent a good deal of time on it and it was well sorted. Just then  a guy came up to me and said “how can I get my Land Rover featured in LRM” and I told him “you've just come to the right bloke feller”.

Fast forward to March 2010 and at last we could get it on and we met up at the off-road site at Canewden in Essex, on a bright sunny morning on a Monday. To say the site was a bit wet would be a bit of a joke. There was so much standing water the Titanic might have got lost in it. Funnily enough fact is we had been together just the day before at the Challenger 4X4 extreme challenge at West Harptree, as the owner of the 90 Steve Law is the winch man for Barry Benjamin in car number 3, and you can see them in action if you click onto the Tixover page later. It was their first time back together as a team . They did the series last year and on the third challenge at Tixover Steve had an accident and broke his ankle and split his fibia in three places. Steve told me “it was towards the end of a tough day winching and I suppose I might have been a bit tired and I wasn't on the ball and concentrating and it was entirely my own fault. We were winching and the plasma rope went across my ankle as I told Barry to winch in. We use voice activated communications now but back then we had a system where you had to reach for a switch to speak, and by the time I fell over and reached for it to tell Barry to stop it was too late”. On the bright side though it don't bare thinking about what might have happened had Barry's 90 been using wire winch rope instead does it? Barry told me “I saw Steve fall Charlie but I thought he had just lost his footing and slipped over”.  Steve went on to tell me “I told Barry to get another winch man, but he declined and he did not do the rest of the series. He waited until I was fit again and it was our first event since the accident at West Harptree yesterday. The sad thing about the whole episode was that I ended up in hospital in Peterborough -where by the way I could not have been looked after any better- on the Sunday it happened, and we were due to fly out for a 2 week holiday we had booked in Florida on the Wednesday. My wife was definitely not amused, and I was non too happy about it myself either”.

Steve Law aged 43 is a motor technician and he works at an independent garage where they specialise in high end super cars. He did his time at a small garage working on anything that made it through the door, until he spent 17 years cloaked in yellow with the Automobile Association, then a few years ago he left and went to where he is today which must be a bit of a change from working on breakdowns to servicing and repairing cars the rest of us can only drool over. Steve got into Land Rovers when he bought a Series 2a 15 years ago which was a wreck that he built up himself. He told me “it was just too nice to compete with Charlie so I sold it. Then my wife and I started a family and for a while I got a bit side tracked until I bought the 90, and I have slowly built it up over the last 10 years. I got it from a scrap yard where it was a trade in. I had to repair the bulkhead and the original chassis which it still sits on today”.

The winch at the front he had to use to get himself out the clag today is a Warn 8274 with 10mm plasma rope that sits within a self converted old Scorpion bumper on the front of Steve's 25 year old 1985 Defender propelled along by a trusty 200TDI engine which replaced the original old 2.5 Naturally Asperated one.  The cage was supplied by Safety Devices which Steve fitted himself. Inside its real tidy with a Mud Stuff  gauge filled fascia and matching pod with boost gauge, an exhaust gas temp gauge, with matching gauges for oil pressure and oil temperature. Steve told me “I am a bit paranoid about the running temperature of the 90 Charlie and I was forever washing out the fins on the old radiator. So in the end I got a custom Allisport radiator and fitted it. It was dear but it was worth it as the Land Rover runs lovely and cool now. Another thing that bugged me was the speedo always waving about especially off-road, so I have fitted a TD5 speedometer conversion and now the needle is rock steady, and in any case my big screen Blaupunkt sat nav needs a speed sensor to operate it correctly and the conversion is much better for that as well”. There's the obligatory radio/CD player with an 100 watt sub woofer between the seats with a mains supply underneath it via a 12 to 240 volt inverter. The CB radio  has an external speaker and Steve is kept nice and warm when he comes out to the 90 on a cold morning by the diesel Eberspacher truck heater which can be turned on by remote control before he drives off. All the electrics are kept fed by the twin Numax batteries which are wired in series as Steve says that in his experience split charging systems can cause problems. A neat touch is the grab rail from a Discovery for the passenger to hold onto off road, and the floor is plated over with 5 tread ali chequer plate. In the back is a fixed air supply with a medium sized tank for tyre pumping and air tools, and 2 lockers holding tools, spares and off-road gear. The standard rear cross member has been cleverly modified to accept a a plasma fairlead for the Warn 8000 winch that sits behind it on a thick plate welded between the chassis rails. It's operated by neat external switches, which is handy as Steve does a lot of towing. The tow pack was made by Steve and it is easily replaced by a strong ring for off-road use. The whole lot sits nicely on Old Man Emu suspension, and there is a rear ARB air locker being installed soon. Steve's future plans are to have ARBs all round and to fit Ashcroft uprated half shafts and CVs as well.

Steve would like to thank his mates Matt and Kevin who painted his Land Rover just before he went on the last Brighton Run and I would like to thank the Rochford and District 4X4 club who arranged for me to use the site they look after at Canewden. The site is closed until May to let it drain & recover a little and then it will be open for play and pay days on the second Sunday in the month. It's not a site for the faint hearted and definitely not for new 4X4 drivers, but I will definitely be going there myself sometime soon. More details can be found on their website at www.4X4er.co.uk or by contacting them by phone on 07766642402. 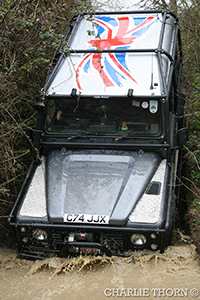