I am always interested to meet up with our readers and see just what they drive and to take a look at their Land Rovers. Some of them look as if they have fallen straight out of the ugly tree, and some even look like they have hit all the branches on the way down as well. These old sheds are usually full of old discarded mouldy clothing and  rotting half eaten pies and oily rags, whilst others are spotless and immaculately turned out with a whole host of extras such as winches and air lockers that are never called into play. It is also of interest to me just what inspires some of the Land Rover people that I come into contact with to start on these massive rebuilds of their treasured motors to get them in some cases to such a fantastic degree of build. In some small way LRM helped to persuade the proud owner Terry White to finally start on the rebuild of his own cracking bobtailed Range Rover. Terry told me “ I was at the LRM show in 2008 and I followed you around the off-road course in your bobtailed Discovery, then I went over to the showground and had a look at some of the other modified vehicles on show there”. Terry had always wanted to own a Land Rover since he was 14 years old when he used to go off-roading with his grandfather, and he eventually bit the bullet and found the money to buy his Range Rover in February 2008. It was a 1986 3.5 EFI 4 door and Terry told me that it wanted a massive amount of work doing to it to get it road worthy. Seven out of the ten body mounts had to be ground off and replaced by welding new ones in their place, along with new inner wings, footwells, and rear arches and seatbelt mounts, although strangely all the cross members were sound. Terry told me” it was 8 months of continual grinding and welding to get it right”.

THE VERY NEXT DAY

Terry went on to tell me, “after that LRM show in 2008 I took my Range Rover off the road the very next day and started the rebuild of it. I did my time as an apprentice motor technician and diesel fitter so I was confident that I could do a decent rebuild and I roped in my 2 pals Dave and Rick to help me, and all three of us together have built my Range Rover. Soon we will have one each as now Rick and Dave have decided that they want one just like mine as well, and we have already made a start on them. We help each other and we are good mates and we make a good team with all the different skills we have between us”.

The run down of all the parts on Terry's project is an almost unbelievable list, and it all kicks off with the complete bobtail conversion and a total full body and chassis rebuild. It was then finished in bright orange paintwork with black detailing. The donor engine was re-bored to a 4.0 litre conversion and has a closed loop LPG conversion with a 90litre tank in the boot running through a Megajolt engine management system. This is a rather clever bit of kit that gives a mighty spark through the twin distributors and it is completely waterproof and Terry has been through deep water well up over the bonnet with no problems. This system also does away with the troublesome flap within the air flow meter as well, and the engine changes through a ZF 4 speed auto box. Many of the parts have been custom made by the guys including the snorkel and front light bar, the alloy fuel tank under the Range Rover, the rear light pods, the tubular rear bumper, the drivetrain breather fed into a custom manifold in the snorkel, the fibreglass roof lining in black suede and the Discovery 300 series door mirror conversion. The engine has been fully detailed and all the hoses have been replaced in blue silicone. The exhaust is a Double S stainless steel item with 4 branch manifolds each side, and the trailing arms are cranked to allow for the 4 inch suspension lift and 3 inch body lift and the radius arms are castor corrected. To bring this lot to a stop the brakes have all been upgraded with the fronts having been replaced with a large vented disc conversion with new calipers drilled and grooved discs with Mintex pads. There is an on board air supply system to run power tools and the rear ARB air lock differential, and there is a Sumo steering damper relocation kit and a return to centre Terrafirma centre steering damper. The suspension is also by Terrafirma with + 5inch shocks  within +2  suspension turrets with built in dislocation cones on the front, and Challenger rear dislocation cones with Terrafirma +5inch on the back end. The bump stops are all extended and the brakes hoses are 6inches long and all braided. The car sits on 15X10 black modular wheels shod with 35X12.5X 15 Maxxis Creepy Crawlers and the spare wheel is held in a custom made clever rear swing away carrier that the boys designed and made themselves. The under body protection is made up of front and rear diff guards with rock and tree sliders and one of the excellent First Four Shadow winch bumpers on the front. Although the cradle is empty at present when funds allow Terry is going to buy from David Bowyer at Goodwinch one of his upgraded Goldfish winches like mine. The car is protected by a Clifford 650 alarm system and immobiliser with total closure and proximity sensor with intelistart, and the seats are from a Subura Imprezza STI in the front with a later spec rear seat conversion. Music on the move is provided by a Pioneer face off  stereo with Ipod adaptor through stonking  13cm Infinity component speakers in the front doors backed up by Infinity 6X9s in the back. Terry finds his way around with the help of his Kenwood hard wired navigation system with its humongous screen topped off with a Carling switch panel in the centre air vent with separate oil, volt, and air pressure gauges and its all kept cool with twin electric cooling fans and its shown which way to go by the Momo Millenium steering wheel. Terry found a decent insurance quote by trawling through the pages of LRM until he contacted Adrian Flux and he wants to point out that they are fully aware of all the modifications and the full spec of his Range Rover and all the attendant paperwork for the vehicle describes it as a bobtailed Range Rover. It was a real pleasure to meet up with Terry Dave and Rick and the Range Rover is a credit to them and I wish them all the best with the next two builds.

I would like to thank Tony Howlands from Oakwood Specialist Training Ltd who train drivers up to City & Guilds standard NVQ level 2 in off-road driving and preparation, for arranging at short notice the use of the private land where we did the photo shoot. 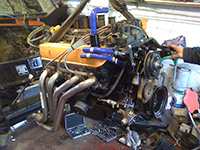