Sometimes you meet up with someone and take a good look at their Land Rover and it is just a bit too much to take in all in one go. One such Land Rover is the 90 belonging to Steve Gunning who comes from Trowbridge in Wiltshire. Steve served in the army for 12 years until he was invalided out after a bad accident that left him with severe injuries to his back and his knees. Having driven and been involved heavily with Land Rovers in the military, and having a deep passion for Salisbury Plain which is right on his doorstep, he decided to build his own version of a 90 to allow him to get out and drive across the by-ways that criss cross the Plain. He told me “ I was inspired Charlie by the Land Rover that belonged to Colin Dawson, TEW that I used to read about in one of those early Land Rover magazines, and the 90 that was featured in a TV series from Australia The Bush Tucker Man which was driven by a retired Major in the Australian army called Les Hiddins. Actually if you look closer you will see that I have built it almost like an exact copy of Major Hiddins Land Rover”. Every single day Steve drives out onto the Plain with his Rottwieler Seeker to feed the badgers and to have a quiet moment and to chill out in the remoteness of this stunning place. Steve is well known to all the Range Wardens and the Police who constantly patrol the area and the military, and he has the letters RRR on his roof so that when they are looking for illegal users that have been reported to be in the area, he can be spotted by one of the many military helicopters that patrol there. He has a very good working relationship with them all, and they liaise with him sometimes and seek his advice. Sadly Steve lost his other Rottie Bumble earlier this year when she had a spinal problem that trapped her nerves and caused her constant pain. Steve told me “I still feel that Bumbles is about in one sense, as she used to come out onto the Plain with me and Seeker every day. I had her cremated and I scattered her ashes on Salisbury Plain but I suppose this is something that only another dog person would understand”.

So Steve looked for a suitable donor car and settled on an abandoned bobtailed Range Rover which he dragged out of a farmers field where it had stood for several years. He paid £250 for it and it was worth it from Steve's point of view because all the numbers matched and all the original components were intact, which meant that after he had completed the build he had in mind, he would be able to retain the original registration. The 90 bodywork that was grafted onto the chassis is standard but it has been double skinned in places to allow for insulation and all the panels have been lined and trimmed. The dashboard is an upgraded military spec version with side de-misters, and the seats are Isrihausen lorry air seats. All the wiring was junked and the car was completely rewired and its all relayed through a 120 amp alternator from a late Range Rover Classic. Also from that same Range Rover Steve took an air brake pump and installed it under the nearside seat box next to a large Optima battery. It feeds a cylindrical tank tucked up under the rear cross member and provides 150 psi for tyre inflation, the big air horns on the roof, and the use of a few air tools that Steve has with him. There is also a jump cable socket off the Optima battery there as well.

Now For The Goodies

The engine is an high compression Pegusas block with 4.2 heads that have been gas flowed, port matched and skimmed to raise the compression to 10-5-1. It had originally a 3.9 blue cam with heavy duty lifters and  stainless steel valves. Fuel is rammed into the engine via a Boxer 4 branch inlet manifold with 4 tuned SU carburettors with Steve's own designed waterproofed twin air boxes with two raised snorkels. Heat drains out thru a 4 core uprated radiator, and all hoses are silicone with some of them shrouded to stop heat transference. The exhaust is a big JE engineering Dakar version. The centre box is an American high flow one with a TD5 90 rear box that exits through the rear nearside wing. Gearbox is an LT95 4 speed with a low ratio transfer box from an early V8 110. The original rear propshaft was shortened and is still in use and the front one  is an ex military 110 armoured version with double cardon joints. This meant that Steve had to convert the difflock to manual instead of being vacuum operated. Both axles are original from the donor Range Rover but have been heavily modified. They are tubed for extra strength and the rear diff has a Detroit locker and the front one a True Trac. The cranked radius arms and the steering  arms have been custom made to Steve's design and are heavily reinforced, and the bushes are all Polybushed with Britpart  yellow springs with De- carbon shocks. Cliff Garrod supplied the Mach 5 wheels and Steve uses 265/75/16 Insa Turbo Special Track tyres as he says they are reasonably priced and if he damages one on the stoney flinty ground out on the Plain its easy to replace one of them.

The front brakes were converted to metric 110 callipers and the original rebuilt imperial callipers are now on the rear with all bronze pistons and extended brake hoses and all new lines all round. That original chassis was cut down to 90 inches and all the out rigging and brackets were changed to LR 90 types. The chassis was then over-plated with steel and chequer plate incorporating radius arm mount skid plates. It also provides a bolting edge for Steve's custom 10mm aluminium belly plate which protects the gearbox. The chassis has extra holes drilled into it to make it easier to wash out the mud after a run and every year the chassis is pressure injected with hot waste oil and Waxoyl so it will never rust, and the same is done to the bulkhead. All shock pick up points have been raised to give more ground clearance, and custom made shock towers have been installed so that twin shocks can be used when required. The brakes were replaced with slotted and drilled heavy duty type discs and the disc pads are race spec. Steve has an Ifor Williams 3.5 ton trailer which he uses for forestry work and logging, and he told me that the brakes work fine with this set up with the Ifor on tow.

Steve told me “in the spring this year Charlie I stripped the chassis and body down to bare metal and painted it all again and carried out a few new modifications I had been thinking about for some time. The chassis is bright yellow because a mate gave me a big tin of JCB yellow for free so that's why its so bright, and also its a hell of a lot easier to jet wash or steam clean it if it gets muddied up. The front doors were fitted with my own design custom built black chequer plate rain deflectors and the wings were also chequer plated for protection and to cover up some dents in them. I also modified the rear axle before I repainted it by fitting brake pipe guards to stop them getting damaged. Some small plates were fixed under the 4 flood beam lights on the front of my roll cage to stop reflection off the bonnet when I go onto the Plain sometimes at night, and mini side facing spots fixed to aid side turns in the dark and to judge how deep some of the water filled holes are after rain. I rewired the headlamps which are Cibie replacements I got from Demon Tweaks and all the lighting is now run through new labelled relays which has improved the light output. When it was standard there was a big voltage drop in the system but the new modifications have made it much better, with maximum voltage now to all lights. The bonnet has been modified since you last saw it with new air boxes made to allow an outside ambient temperature air supply to the Boxer air boxes. It helps with the heat that is generated under the bonnet and air that is now entering the 4 SU carbs is a lot colder and it aids performance. The engine has been part rebuilt and a new mild performance camshaft installed which has improved bottom end and mid range performance. I would guess now that the engine develops about 300 BHP in its current state of tune. I have 2 high pressure Red Top fuel pumps now and a Malpassi fuel regulator so I can adjust the pressure to suit what the vehicle is being used for either a slow green lane run, some heavy towing, or a long run on the road. The Polybushes were all renewed with the  orange range and lastly I modified the suspension by putting the shocks at the back inside the springs to give more articulation and I changed over to oil dampers”.

Just like me with my bobtailed Discovery Steve does not want to sit down with a calculator and work out how much he has spent on his project in case it scares him. But he did have the Land Rover professionally inspected up on a ramp by his insurers engineer recently and they agreed a valuation of £10,000. He has in fact recently been offered £12,000 for it, which he has turned down. Over the years since we first met up me and Steve have become good friends and many times I have asked him to come to Wales with me or to Devon or Exmoor to see some of the by-ways there, but he told me “to tell you the truth Charlie I am happy down here every day on the Plain and I will gladly stay here forever and enjoy the beauty of this place, and now that you have been down here with me many times, you tell me, why would I ever want to move away from it? 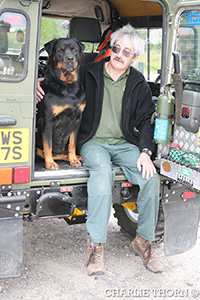