HAPPY DAYS, OR NOT SO GRUMPY

When someone told me that I really ought to go over the water to Essex and meet “Grumpy” and take a gander at his Range Rover, I didn't know whether to take a baseball bat with me or to go with a smile on me face carrying a generous gift for  the feller. Anyway when I got there and met up with Jon Norman and after extricating my crumbling hand from his big fist after a real manly handshake John Wayne would have been proud of, I was glad to see a big smile spread all over his face, and after spending the day with him I fail to see why anyone would ever call him Grumpy. Grumpy's Toy was what I had actually come to see and boy was it worth the trip, this Range Rover took my breath away as the workmanship put into it by Jon was a proper top job from top to toe, end to end.  It's one of them Land Rovers that when you see it it's sort of inspiring, and all the way back home I kept thinking that “you really ought to get another Range Rover Charlie lad and build one just like it for yourself”.

Jon along with his wife runs a successful business in Tollesbury called Brunel Performance which is way down in Essex near the Virley Channel that leads out to the sea beyond, and it's a top spot for yachting enthusiasts. After leaving School Jon did his time with a company building Cosworth V8s and rally engines. He then went to Lotus and worked on gearboxes in the formula 1 team looking after Jonny Herbert and Mika Hakkinen. Pretty soon his talents were recognised and he started working for a host of top motor sport works teams in group C and touring cars and he travelled the world following the circus around. After a few years whilst he was testing at Monza with Honda it just struck him that he was not enjoying it any more. Jon told me “ really Charlie I was a nomad, I never really even felt I had a home any more, so I came back to England and got a job working at a Land Rover specialist as a workshop foreman”. “Pretty soon I started making aluminium products here at a workshop behind my home in Tollesbury, and then 6 years ago the village garage here came up for sale so we bought it”. “That gave us the bread and butter side to our business and it allowed me to build up the aluminium products side I wanted to concentrate more on. Brunel Performance make intercoolers, radiators, header tanks, an EGR replacement kit, and a really clever top hose fan switching kit that allows a foolproof way to get your electric fans to come on at the correct time you want them to. They also make Kevlar and carbon fibre products, and they send their products all over the world. They specialise in one off's and bespoke products to order. The garage also offers full car and Land Rover preparation for MOT , and they have Rover Com Pro on tap as well as the Snap On scanner, in fact anything from light bulb replacement to engine and gearbox rebuilds they will tackle here.

After Jon was satisfied that the business was on a solid footing he decided to start competing. In the early 1980s he had bought a 2 door Range Rover, and he told me “way back then Charlie I put a set of Mickey Thompson Baja tyres on it and I thought it was the nuts. I started doing a few trials and off-road play days and I loved green laning and did loads of it”. “But I wouldn't go laning in anything like my bobtail as it is today, because if people saw it out on the lanes it would give the wrong impression as I think it looks a bit too aggressive”. “I've just realised talking to you mate that I actually got Grumpy 12 years ago and all the essential bits of kit on it (at least that's what we tell our wives don't we) have been added whenever I could afford to do so. Just because I have my own business it doesn't follow that I can afford to keep throwing loads of money at my Range Rover. Just like anyone else I have to save up a few quid first before I can modify it further”. “As it is now I do a few of the extreme challenges and I have to pick and choose as work and family allows as we all do Charlie. We have recently just come back from an excellent event we really enjoyed at Clyro in Wales and we did the Trophee Cevenoll in France in May as well”.

LETS GET IT ON THEN

After a cuppa after our chat it was time to see just what this mother could do. So we saddled up and went up thru the village to a farm a few miles away where we could put it thru its paces. I noticed as I followed Jon that all the villagers waved at him as we passed by which completely buried the Grumpy myth. I got the cameras out and it was a lovely day as the throaty noise from the 5 litre TVR engine boomed out across the fields, and it did everything Jon asked from it admirably until it slipped side on into a reed bed. No worries there then as Jon simply hitched up to the back of me and used his rear winch to pull himself free before doing any more damage to the reed bed.

The rear quarters are made from kevlar, the corners are fibre glass, and the wheel arches are carbon/kevlar. The rear and side windows have been replaced with clever roll up fabric covers. The external cage is made from cold drawn seamless tubing and has been TIG welded, the front bumper is a custom Brunel product with creased recesses in the ends to take a winch rope in case of side pulls. Now isn't that clever? The body has been lifted 50mm on Dural spacers, and the rear is totally spaced framed for weight saving and to give more strength.

The power is delivered  by a 5litre TVR lump giving 320bhp at present with custom made forward facing heat wrapped headers going into a Vortex exhaust box and exits via a 3inch system high up thru the rear passenger quarter. The gearbox is a beefed up four speed auto with larger clutch pack and an aluminium twin fanned cooler with a LT230 transfer box with 1.666;1 ratios and feeds the axles via Brunel custom made carbon jointed wide angled prop shafts. The original axles have been double tubed and gusseted and equipped with ARB air lockers, and as Jon drove the bobtail around for me later I could here the hiss of air being puffed out as he constantly engaged them. McNamara half shafts are installed at the front with 110 swivels and the cv joints have hardened drive flanges. Jon uses Ashcroft half shafts and all the axles have Brunel raised axle breathers. All the pipework has been run between the chassis rails and under the bobtail its all protected by a big aluminium skid plate. The brake pipes and hoses are all steel braided and the flexible items are all hi-spec neoprene lined, the same as those used in
racing cars.

Front suspension has skeleton top damper mounts that are TIG welded. De Carbon front dampers and the panhard rod is Equipe rose jointed. The steering rods are solid with greaseable rollers over them and the ball joints are also the greaseable type. The rear has lengthened and rose jointed radius arms with Equipe rear dampers fitted. The springs are constantly being changed at present trying to find the right set up, and Jon has even toyed with the idea of maybe some day replacing the springs with a Brunel custom designed air suspension system. Inside you sit on Recaro seats held in by FIA four point harnesses. There's a Brantz Laser 3 trip meter, an Eberspacher heater, a Lifeline fire extinguisher, 110 litre foam filled ally Brunel fuel tank with a Porsche turbo fuel pump punching the fuel in. There is an internal Safety Devices FIA approved cage and an ARB air compressor feeding a spun alloy air tank that provides 90psi at a side mounted air outlet socket on the offside rear quarter panel. The 9X 16 inch Matt Lee Mach 5 wheels are custom made with a 6inch offset so no wheel spacers are required and they are shod with 37/14.5 X16 Maxxi Creepy Crawler tyres with internal bead lockers.

The winches are a front mounted Warn 8274 with a 24 volt Bowmotor and the drum has been reduced in diameter and stretched 3inches and a roller bearing has been installed in the end casing. The brake has a set of uprated linings with 150 feet of 11mm plasma rope running thru a Brunel stretched ally hawser. The rear item  is a very large 15000lb Superwinch again with a 24 volt Bowmotor and 150feet of plasma. It sits behind the seats almost in the middle of the car and exits thru the rear cross member. Both winches are powered by two Optima batteries that nestle in the cabin behind the raised ECU at the back of the auto box lever and are charged by a 90 amp 24 volt alternator. On the back rear pillar is what Jon calls “the most important feature” of his bobtail which is a bottle opener, and the rear tailgate is louvred as Jon also says “just because I like the look of it”.

Plans for the future are to install a hydraulic rear steer set up which is all made up sitting in his garage and will be fitted when time allows. Jon has already developed and perfected one of these rear steer systems before that he installed on another car that he built, which has now been sold to one of his customers in the USA. Jon told me “when I get round to installing it Charlie I will not use it on all events I compete in. I have developed it so that I can easily install or remove the system to suit the events I enter”. Another winch which will be mid mounted and will exit thru the roof is also to be installed soon. Jon told me this will allow him to get to those more difficult punches on extreme challenges by enabling him to lift the car up to swing it towards the punch. A Mega Squirt fuel injection system is also on his wish list which will likely increase the power output from the thumping 5 litre TVR lump even more. These systems can be re-mapped to suit the conditions wherever the car is being used at an event, by plugging the Mega Squirt ECU into a laptop computer that has been loaded with the necessary soft ware. 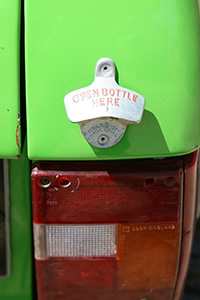 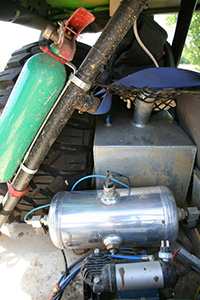 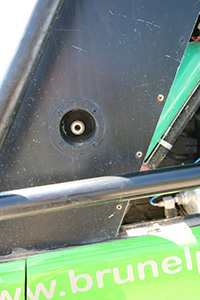 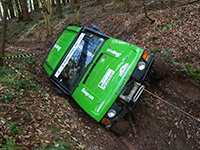 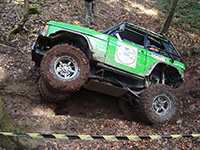